Accessibility Tools
Hide
Day 1: You should judge a book by its cover!
Posted on: 11 January, 2016 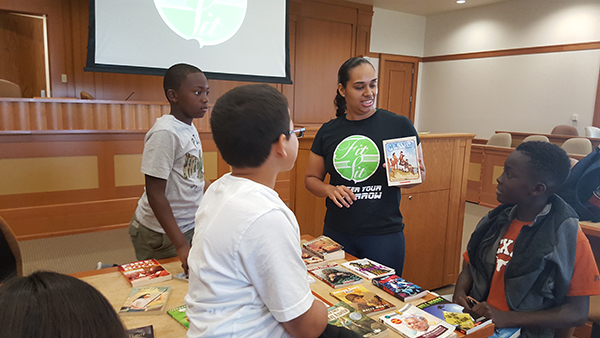 Leiva and I were super excited to take our Middle School FitLitters to the local library. We could not wait to observe their inquisitive faces as they navigated through the giant bookshelves of the Edison Center Branch Library, many probably for the first time. We were originally set out to have thirty kids, but last week, the projected number of kids dropped to seventeen; ultimately, though, once we got to the FIU South Campus today, we were informed that only eight kids had showed up. While we were still digesting this news, we were also informed that the trip to the local library had been cancelled because of the small number of kids in attendance. We were devastated by the latter news--without the library tour, there would be no books for the kids; without the books, there would be no Lit (literature), and without Lit, there could be no FitLit.

The devastation only lasted a  minute, though. After a collective ten years teaching, Leiva and I have become masters of what we call PIBE (Play It By Ear). So it only took one look for us to simultaneously think, “we gotta PIBE this.”  We were too excited to meet our eight new kids, so we had to make it happen. We took the rest of lunch to PIBE, and by the end of lunch, we had a plan. I had a duffle bag full of books in the trunk of my car, so we grabbed those and laid them out in the room to create our own FitLit library. We also decided to give the kids a reading habits survey, in which they would answer questions such as, “when was the last time you read a book from beginning to end?” and “when was the last time you read a book that you chose yourself?” forty minutes before the kids got there, the room was set up and we were ready for the them--once again, PIBE-ing had saved the day.

Thirty minutes later, the kids swarmed the room, giggling and jumping, holding various items in their hands: a cup, a water bottle, a sweater, and a straw.  The smiles on their faces waved goodbye to the hints of frustration from not so long before. At last, we met them: Andrea, loved the courtroom in which we met so much that by the end of the hour, she was pretending to be a judge; Prodigy tried to convince me that I was from Uganda; Amaya told us she is from Haiti, and she showed us a picture of her cute baby sister who is from Honduras; Joshua only looked at the FitLit logo for a few seconds, and he had already identified the two books and the hidden dumbbell; Caleb powerfully argued to his mom that he needed a cellphone to be successful in this camp; Wellington paused, straightened his back and slowly articulated each syllable every time he said his name; Sean was so quick to read everything he saw that he ended up reading most of the survey’s questions out loud for the others; and Fabian was so energized that he thoroughly completed the reading habits survey in a few minutes and waved to Jasmin (our intern) to come collect his survey. Each of the kids was special in their own way, and this confirmed to us that we are going to have an amazing FitLit camp this summer.

By the end of our short hour together, the kids had shared their reading habits with us; they had gone through our improvised FitLit library and told us which books they would absolutely not want to read, as well as which books they would be interested in reading; they had also learned from us a few tips on how to effectively choose a book to read. While they were learning, some kids made the case that they disagree with the popular saying, “don’t judge a book by its cover.” Leiva agreed with them and elaborated on why she thought it actually made sense, sometimes, to judge a book by its cover. The kids smiled and nodded as they watched an adult indulge their contrary statement.

As we said goodbye to the kids, we made our last announcements: we will go to the library tomorrow; you should only choose a book that you would love to read; and make sure to bring a good spirit every day.

We ended our first FitLit session with mixed feelings. We were excited to have met the kids, and we can’t wait to see them transform throughout the program. However, we could not help but feel extreme sadness to not see more kids at FIU to take advantage of this amazing opportunity. We know how many kids in our community would benefit not only from FitLit this summer, but also from working with the law student's at FIU in the morning. We are told there will be more kids tomorrow, though, so we are hopeful.