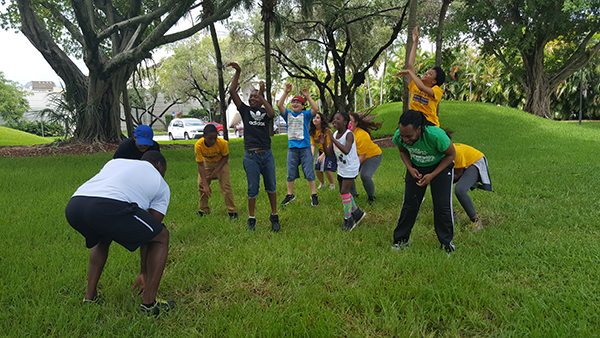 I have been procrastinating writing this blog post for a few days. I started writing it on Friday, but then I could not get myself to finish it because I knew it was the last one. It’s like when I watch a captivating show that only has one season--when I get to the second to last episode, I delay watching it as much as possible. For some of those shows, it has been months, and I still have not watched the last episode, just because I don’t want it to “end.” It won’t be the case for this, though, so here I go.

Leiva and I were dreading our last FitLit day, especially because we had heard that some kids would leave right after lunch, therefore missing our last FitLit session. We got there early, though, because we wanted to watch the kids present what they had been learning with the law students every morning for the past two weeks. The kids were all dressed up, boys wearing nice shirts, ties, and bow ties, and girls wearing formal dresses, skirts, and shirts. As the kids settled in two distinct groups, Jonathan, the lead law student, introduced the topic for the debate: “the debate is focused on the use of metal detectors in schools, especially k-12. The group to my right will argue for the use of metal detectors, and the group to my left will argue against the use of metal detectors in schools.” The kids’ performances were remarkable. They argued so eloquently and confidently that I kept visualizing them in the movie The Great Debaters with Denzel Washington. Leiva and I were constantly smiling and clapping during the presentations. The smiles got bigger, though, and the claps got louder each time the kids would use phrases such as, “it is unconstitutional; my opponent will argue that….., but I disagree; that constitutes unreasonable search; breach of privacy; the bill of rights;” and more. The passion with which each kid made their case gave chills to the whole audience, and the proudest faces in the room were the parents’. They were in awe as they watched their kids make such strong cases for and against the use of metal detectors in schools. Most parents spent most of the time struggling to simultaneously watch their kids in admiration, make eye contact with the kids, smile at them, record them with a camera, and clap for them. Witnessing this only made the kids argue with even more passion, and the whole presentation culminated in a round of applause that seemed to last a couple minutes. The kids were proud, their parents were proud, and we were proud of them. As we transitioned into lunch, Leiva and I watched the kids eat and laugh with their families, and while we were so happy to see this picture, we could not help but feel like this was it. “This feels like a great way to conclude the two weeks,” I told Leiva. “I wonder if they will want to have another FitLit session after this.” Leiva agreed, and for a few minutes, we were unsure of what would happen.

Suddenly, Caleb asked, “Are we doing FitLit today?” Leiva and I responded, “Of course!” I am not sure if what I saw on Caleb’s face was relief, contained excitement, or frustration. Within a couple minutes, though, more kids had asked us the same question, and each time we confirmed that we would indeed “do FitLit today,” the kids got more and more excited. Sean even went around talking to all the kids to make sure they were staying for FitLit; he came back to report that only one kid would not be able to stay. With this announcement, Leiva and I were immediately filled with energy, so we started planning (or more accurately PIBE-ing). We decided to take the kids on the FIU nature trail, with the idea that we would walk or run, and occasionally stop to complete some exercises along the way. As we were headed to the nature trail, Leiva asked, “should I grab the deck of cards?” As I responded, “Of course,” the kids started asking, “ a deck of cards? For what?”

We started walking down the trail, and a couple minutes into it, we got to our first workout station--abs. The kids were instructed to set up in pairs and to perform ten sit ups as fast as they could. Though this was not supposed to be a race, it turned into one, and each kid wanted to make sure he or she was going against someone who would challenge them. After this first station, we walked to the next station where I told Leiva to get the deck of cards ready. This was enough to get the kids’ attention, so while I had their attention, I asked each of them to choose between squats and push ups. After they made their choice, I told them, “alright, you will perform as many reps of squats or pushups as you will be instructed to. Leiva, let’s go!” Leiva then explained to the kids: “Look, each of these cards represents the number written on it. The King, Queen, and Jack, though, each represent the number ten; as for the Ace, it represents the number one. I will randomly select a card and throw it on the ground. Then, you will perform as many reps as are represented on the card.” The kids did not have to be given directions more than once, so some got in squat position while I, along with a few others, got in pushup position. The first three cards Leiva threw posed no challenge, and the kids were still very excited, but as we got to the sixth card, the numbers started getting higher, and the kids started making a lot of noise. We were used to this by now, though--they were feigning frustration, but they were still excited, as evidenced by the laughter and cheers when they completed the exercises. We were only able to complete one more round of deck-of-card-exercises before the rain forced us to sprint back to Camp Justice 4.

Once back in the room, we started playing an improvisation game where we formed a circle and collectively created a few stories by only being allowed to say one word each at a time. With careful listening, the story always made sense, and the plot often ended up being very creative. Then, Leiva used her experience as a former summer camp leader to teach us a series of pattern games that had the whole room, kids and adults, go crazy with excitement. She set the stage by describing an apocalyptic scenario that required only a few people to enter a rocket ship to go start a new civilization. “I can only take a few people with me, so make sure you identify and follow the pattern in what I say.” Then she started, “my name is Leiva, and I am bringing a Lollipop to the ship.” Next was Caleb, who said, “my name is Caleb, and I am bringing a friend.” “I am sorry, Caleb,” said Leiva. You cannot come. Prodigy was next, and he said, “my name is Prodigy and I am bringing pencils.” “Yes,” responded Leiva, “you can come.” For several minutes, no one else was allowed on the ship because they were all bringing the wrong items. Even I did not get it the first time. Eventually, though, we all figured it out, and we were all saved when Balla brought a basketball, Ashley brought apples, Fabian brought a faith, Caleb brought crayons, etc.

The pattern games ended with excitement; we gave each kid a FitLit bookmark; and we said goodbye normally, as if we would see each other on Monday. It was obvious, though, from the way they prolonged eye contact with us, as well as the way they hugged us and held our hands a little tighter than usual, that they knew they would not have FitLit next week.

Leiva and I agreed that this could not be the last time we saw the kids. We want to be a constant presence in their lives just as we want reading and fitness to be a constant presence in their lives. We have ordered EveryDayFitLit exercise shirts for them since they had been asking for those since our very first FitDay. We will probably see them next week to give them the shirts and remind them that whether we are with them everyday or not, FitLit should become inclusive in their weekly routines.