Accessibility Tools
Hide
Day 2: No library card because of my mom?
Posted on: 12 July, 2016 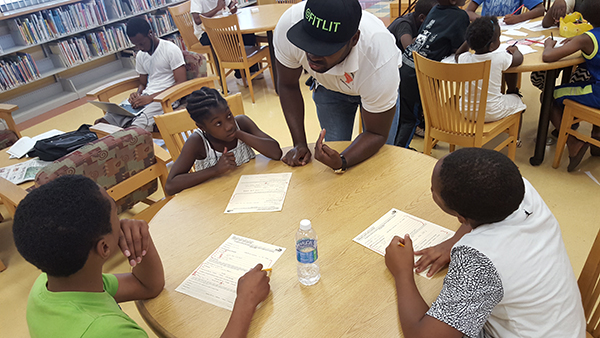 Today, we left the library with a heavy feeling of sadness, though the day started with more energy than we had anticipated.

Leiva, Jasmin, Arturo (second intern) and I got to the Edison Center Branch Library thirty minutes before the kids. This was the perfect time to talk to our interns about their role with FitLit this summer. We exchanged a few thoughts about our social media strategy, and before we knew it, the kids were there with the application forms, so we got to work right away. The kids immediately spread around the library and started looking through the bookshelves. Within ten minutes, Sean, Amaya, Wellington, and Launy (this was her first day) had each chosen books, and they were laying on a mat in the back of the library, devouring their book’s content, one page after the other.

Meanwhile Leiva and I took the kids’ application forms to the librarian to start the process. After taking a quick look at the forms, the librarian informed us that approximately six of the kids would not be able to get library cards today because their forms were missing some important information. As we read the forms, though, Leiva and I concluded that with a little help from the kids, we could complete the forms right away. We called the kids one at a time, asked them questions, and called/texted their parents to confirm addresses and create passwords. We were a bit anxious that this was taking so much time, since we had not explicitly taught the kids how to navigate through a library yet; however, they all looked very comfortable as some continued to peruse various books through the bookshelves, and others kept getting deeper and deeper into the worlds created by the books they were reading.

At last, it was time to create library cards for each of the kids. We started calling the kids, and one at a time, they confirmed their passwords with the librarian, chose a key card that fit their personality, and posed for an official picture. Each kid impatiently waited to be called - even the ones who were deep into their books kept eyeing us to see if it was their turn - and it felt great to see them so comfortable in the library. Before Wellington cracked the biggest smile possible for the camera, he approached Leiva and thanked her for bringing him to the library - ”I have always wanted to come, “ he said, “ but I never find anybody to take me.” Most kids seamlessly went through the same steps, but when the turn came for Joshua and Launy, the librarian told them, “I am sorry, but you can’t have a card today.” The kids obviously did not like that response. Launy reluctantly returned her key card when the librarian asked for it, and Joshua yelled, “why?” out of frustration. After the librarian could not give them satisfactory answers, they looked at us with sad faces, and all we could do was tell them to join their friends while we figured things out.

The librarian then explained to us that the kids could not have library cards because their parents had checked out books in the past and had failed to return them. Launy's parents had failed to return three books in March 2009, and as a result, they owed the library $41.90; and Joshua’s parents had failed to return two books in April 2010, and as a result, they owed the library $27.98. We unsuccessfully attempted to solve the problem, and the two kids’ frustration grew. Launy channeled her frustration into vigorous conversations with Alicia while continuing to read some books, but Joshua shut down and from then on, he did not want to be in the library. A few minutes before it was time to leave, almost every kid had a book that they were excited about, including Launy, since another kid could check out the book for her; Joshua, though, argued that he had looked through the entire library, and not a single book was interesting to him. No matter how many suggestions we all made, he did not seem interested. Even when we took our final picture and made a Boomerang for Instagram, he declined to join, though it seemed obvious from the look on his face that he would have enjoyed being part of the group as much as the other kids. At the end, I convinced him to take a book about Football, since he likes that sport, but even as he was taking it, he told me, “I don’t like this football team.”

We concluded with goodbyes and final announcements: tomorrow will be a Fit day, so come in workout clothes and bring water bottles. As usual, make sure to bring a good spirit.

The day went really well for most of the kids, as they left with a book they love and a brand new library card to show their family and friends. Statistically, we had a good day. However, following the theme from yesterday's reflection, once again we could not help but feel extreme sadness as we watched Joshua leave with a disappointed face. He had been one of the most excited when they initially entered the library, but after he was denied a library card, the whole experience was turned upside down for him. As we made eye contact for the last time before leaving, his eyes seemed to ask, “why would I not be allowed to get a library card like my friends because my parents did not return a couple books six years ago?” I am certainly hoping he will feel better tomorrow.