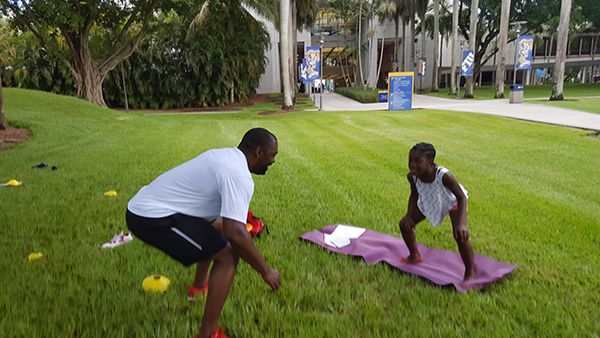 The kids had a blast during our first Fit Day. We got there forty minutes earlier, and we chose a nice shady area on the grass to set up our yoga mats, cones, jump ropes, and agility ladder. While we were waiting for the kids, we started playing with a couple freebies, and that’s what we were doing when the kids got there. Joshua was the first one there, and he had a huge smile on his face. He raised his two hands, yelled my name, and proceeded to give me a double high five. We could not have hoped for a better beginning of the day. Most kids ran to the props they saw and started using them. Within seconds, Wellington was showing off some moves on the agility ladder, and Prodigy was jumping the rope at an impressive speed. They all looked excited, but we had to remind them to rest, since we were about to go through an intense Fit Test.

As they all gathered around us, Amaya told us that she was allergic to grass, so we directed her towards one of the yoga mats. She jumped on it with a smile and gave us her full attention as we went into details about the Fit Test. The kids who had cellphones were sent a google form with the names of all ten exercises, and the kids without cellphones were provided with paper and pens to replace the google forms. The plan was to spend sixty seconds performing as many repetitions of one exercise as possible and then record the number of exercises on the paper or the google form. I proceeded to describe and demonstrate each exercise for the kids, and every single time, a couple of them started performing very energetically right away. While demonstrating high jumps, I had to remind Wellington to “not use so much energy because you are about to try again and keep track of your performance. You want to be as rested as possible before you start.” He stopped right away, but right after I demonstrated Jump Squats, he did the same thing. By the time I was demonstrating burpees and plank punches, Caleb, Sean, Alicia, and Prodigy were also exhausting themselves at trying, and this was all before we started the actual Fit Test. They were having so much fun that I gave up trying to reason with them. After all, kids having fun while exercising is exactly the experience that FitLit strives to create.

As we started the Fit Test, each kid took it a different route: Amaya was focused on showing everyone that, though she is so young, she could do all the moves; as a result, she performed every move with vigor and only stopped when she was out of breath. Alicia, even though she had heart problems, also made sure she tried every single move until she was physically unable to continue; then she would take a break and continue. Wellington, Prodigy, and Caleb were all about speed; they sacrificed correct form in order to perform as many repetitions as possible, and eventually, they started arguing because Caleb accused Wellington of inflating the amount of repetitions he had performed. Sean had a mind of his own and would count down 5,4,3,2,1 at the top of his lungs before performing a move for a few seconds and taking a break; he would try again once or twice and then stop to check what our next move was; then he would announce, “Our next move is….” He did this every single time. Tamir went a unique route--she was working out very slowly and meticulously, and her form was excellent; When she was not sure about the form of an exercise, she would ask one of us and only continue when she had mastered the form. Joshua was mostly having fun; he transformed each move into something he enjoyed: at times he jumped like a frog instead of doing jump squats, and another time he whipped and nae naed instead of doing jump squats. Though this did not look exactly like what we had planned, we could not have hoped for a better first Fit Test. The kids had so much fun that they even invited their two chaperones to join us. Even though the chaperones were not wearing workout clothes, they joined, and we all ended up laughing and sweating on this beautiful evening.

We closed with our daily announcements for tomorrow: drink lots of water, rest well, and tomorrow, bring your book and a good spirit.

Today was the funnest day we’ve had with the kids. From the beginning to the end, the whole session was full of energy and all the kids left with a smile on their faces. We needed this experience after yesterday’s incident at the library, and I am glad we got it. It will be interesting to see how the kids’ fitness levels improve throughout the camp.