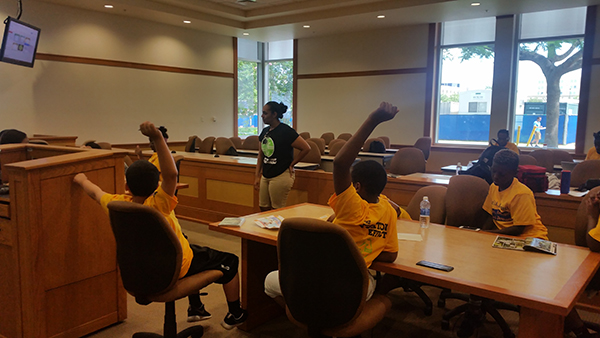 We entered the CAMP 4 Justice room excited to start our first full Lit Day with the kids, but we were immediately greeted with small jumping and cheering bodies dressed in workout clothes yelling, “finally….let’s go workout;” “do we have to workout outside?” “ I am ready to go!” Right behind them were two bigger bodies, also in workout clothes, and as excited to go exercise--that’s how much the kids and the chaperones enjoyed our first Fit Day yesterday. Leiva and I looked at each other, smiled, and slowly told them in unison, “we were not planning on working out today--it’s our first Lit Day.” The room got quiet for a split second, and then they burst into various exclamations of disappointment--”Are you serious?” asked Wellington, “I was ready;” most kids reacted the same way, and even Mr. C, one of the chaperones, told us, “the kids called me out yesterday, so I came ready.” Leiva and I looked at each other again, smiled, and mentally agreed to PIBE the situation. “We had planned to do a full Lit Day today, so that tomorrow we can do both Fit and Lit. If you want, though, we can do both today instead.” They all sat down and started thinking very hard. Sean was mumbling something that sounded like, “we should probably just read;” Alicia kept smiling while telling Andrea, “I did all the moves yesterday; you can do it, too;” and Caleb said, “doing both? I wanna workout straight!” After taking a vote, we decided together that it made more sense to focus on Lit only today because we had not spent enough time together interacting with books.

It was time for our first Sustained Silent Reading (SSR) session. We explained to the kids that they were going to silently read for 15 minutes while listening to some soft instrumental music. It was important for us to watch them interact with the texts they had picked up from the library a couple days earlier. We set up our Pandora station to Max Richter, and the kids started reading. Sean insisted that we set up a timer because he was tracking his reading speed, so we started a timer and watched them. Alicia, Tamir, and Launy sat together and started reading silently. For a least three straight minutes, it looked like they were not moving. I passed by to check on them, and the level of focus on their faces convinced me to walk away and let them read. Caleb and Wellington shared a comic book because Wellington had forgotten his book at home, but they were as focused as the girls. Before we knew it, the fifteen minutes had passed, and it was time to debrief.

I started by asking the kids if they had ever heard the term “lizard brain.” Launy argued that lizards are rather smart, and it’s pretty cool that even when their tails are cut, they keep running; Caleb let us all in on a family secret--”there is a lizard in our house; we call him Bobby cuz he helps us get rid of all the flies and mosquitoes. He is nice; he only shows up about twice a month;” Prodigy argued that lizards are pretty hard to catch, and therefore, they are pretty smart. After listening to their thoughts on the “lizard brain,” I explained to them that a lizard brain allowed the lizard to do primary three things--stay alive, eat, and reproduce. Then, I made the connection between a lizard brain and an amygdala. “Our amygdala is our lizard brain,” I told them, “but we can do much more than stay alive, eat, and reproduce because in addition to the amygdala, we have other brain parts that make us smarter than lizards.” The kids were fascinated to learn so many facts about their brains. They understood that the instrumental music we played was designed to help them maximize the performance of the “smart” part of their brain.

We then transitioned into the last section of our day, and Leiva started teaching the kids about the meaning of a theme. Most of them already had an idea, but we realized that they could not quite differentiate between a main idea and a theme. Using the Three Little Pigs as a story that all of the kids were familiar with, Leiva taught them the difference between a theme and a main idea. Once they had mastered those differences, they started taking turns to tell the group about the theme of the book they were reading. As they shared the multiple themes they had derived from their books after reading for fifteen minutes, it became evident to us that there was no longer any confusion about the meaning of a theme. They were so excited to discuss their books’ themes that when it was time to leave, they wanted to continue talking, and a few of them even stayed in the room to keep the conversation going. Right before leaving, Sean stopped by Leiva and told her that he was done with his book. Her face lit by pride, she smiled and told him, “you should return it to the library and get another one.” He smiled back and yelled, “YES!”

As usual, we closed with our announcements for tomorrow: we have a Fit and Lit day tomorrow; bring your book and your workout clothes, and of course, and bring a good spirit.

The group has become a family. The kids are comfortable with each other, and they are comfortable with us. They remain excited, even when the task requires focus, but as soon as one of them makes eye contact with Leiva or me, they remind the others to focus, which they immediately do. Tomorrow’s Fit session will probably very animated.