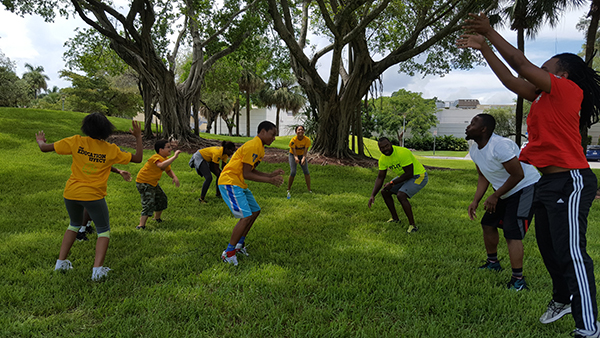 “IT’S FITLIT FRIDAAAAAYY,” the kids yelled as we finished our first full high intensity interval training session. I have never seen kids express such excitement and happiness while simultaneously complaining about the toughness of a workout. I expected it would be such a high energy day because as soon as we entered the CAMP 4 Justice room, I noticed Joshua had brought a book from home. Right away, he said, “Balla, I brought my book from home--I am ready to read. And you know what? Imma put y’all to shame today when we exercise.” Right then, I knew the day looked promising.

Leiva started by asking the kids the difference between a theme and a main idea. Launy raised her hand right away, and Seam raised his a couple seconds after. “Not Launy, and not Sean,” Leiva directed.

Caleb then raised his hand and started answering, “the difference between a theme and a main idea is…” someone interrupted him, and within forty-five seconds, a posse comprised of Caleb, Tamir, Launy, and Alicia had provided the answer: a theme is the message, the lesson you learn from the story, and a main idea is just facts and details about the story. Unsure of how they had just managed to answer the question together in such a coordinated manner, I looked around with my eyes wide open and my eyebrows raised. Instead of trying to understand, though, I smiled, congratulated them and continued the conversation.

While they were finishing up the review, Launy raised her hand. Once we made eye contact, she asked, “can we please listen to music again while reading?”

“Of course! I am already setting up my Pandora, “ I responded. A few minutes later, we were done with our SSR, and the kids were changing into their workout clothes.

Joshua was the first one to change, and right as I headed out of the room, he yelled, “BALLA!!!”

I turned back and he was right behind me.

I replied by gently reminding him how energetic his fitness performance had been a couple days earlier, and he responded, “that’s nothing. I was milk and cookies then! I was milk and cookies!” When I prompted him, he proudly declared, "Today I am RED BULL!” That statement embodies the attitude all the kids, as well as their chaperones had today as we started working out. We completed two full circuits of high intensity interval training, and everybody scored B+ or higher for effort. We were all drenched in sweat by the time we finished, but every single face had a vibrant smile on it.

The kids stuck around to play with the jump rope and frisbees, and Leiva went around asking the kids, “what’s today?” and every single time, each kid responded, “IT’S FITLIT FRIDAY!”

Today, we concluded by high-fiving each other and promising to do even better next week. We did not need to make any announcement for next week. They all know the deal by now!

It’s been a phenomenal week 1 for FitLit, and the kids, as well as their chaperones, are now officially certified FitLitters