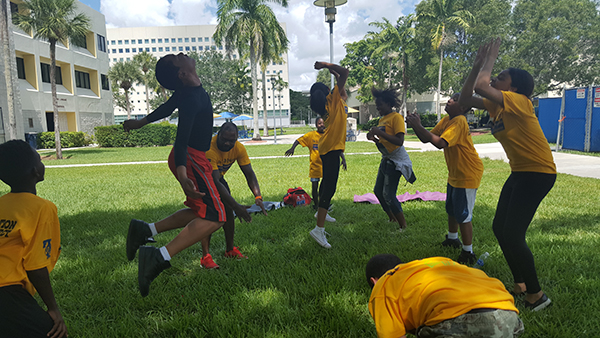 I gotta say, today was a Monday! The kids were excited to see us, and many gave us hugs. Launy ran to Leiva to hug her, and Joshua ran to me. We asked them if anything amazing had happened during the weekend, and Launy proceeded to tell us about a historic site she visited in the Everglades. Fabian told us how much he had enjoyed Disneyland, and every other kid in the room wanted to share something. As soon as we transitioned into reading, though, I started seeing facial expressions that took me back to my classroom during the school year. Fabian was staring at me, but he could obviously not see me. He kept smiling, as if he were in his bedroom, staring at an ice cream truck with a missing driver. Amaya was as sweet as usual, but she did not have a book, and neither did Prodigy. Alicia looked very tired, and though Launy kept wanting to answer every single question, when she was chosen, she would talk about a minimum of three topics at a time, except none had anything to do with the question that had been asked. She kept raising her hand each time we started asking a question, and eventually, we had to give a chance to other students to answer--that’s when she also shut down. With her head on the desk, she kept peeking up with one eye to see if we were paying attention to her. That scene took me back to so many Monday lunches with colleagues--after a long silence, only occasionally interrupted when utensils made contact with a plate, someone would ask, “so how is it going?” and everybody else would respond in unison, “it’s Monday!”

I smiled as I remembered those days. We all knew what, “it’s Monday” meant, but we knew the kids would be back to their regular selves the following day. With that in mind, we started the lesson, which was focused on plot and characters. We asked the kids if they knew the meaning of a character: “it’s the people in a story;” “it’s the main characters;” “it can also be animals or things, though.” All their answers showed that most of them had at least a basic understanding of the meaning of the word character. We then taught them the difference between a protagonist and an antagonist. Most of the kids knew that movies had good guys and bad guys, but they swore they had never heard the words “protagonist” and “antagonist.” After a few more minutes of discussion, most of them had a good understanding of the two words, and a few gave us examples of protagonists and antagonists in their favorite movies: The Purge, The Jungle Book, etc. By this point, we only had ten minutes left for our SSR, so we started playing the music.

After a ten minute SSR session that seemed to last hours, we transitioned into the Fit portion of the day. Joshua seemed excited, but most of the kids moved in slow motion. Based on their energy level, I knew high intensity cardio would not work today. We started by spending a couple minutes stretching, and then we went for a steady cardio session that involved eight moves to be performed at a steady rate for one minute each. They were supposed to have about a minute after each exercise for a break, but each time, they took a little longer. For each of the first exercises, no more than half of the kids were engaged at a time, so Leiva and I, without consulting each other, started narrating their behaviors. “Alright, Alicia is looking great. Keep it up, Alicia!” “Way to go, Sean, perfect form right there.” Each time we narrated a kid’s behavior, the kids next to him or her would automatically start moving. Thus, Leiva and I continued, “Good speed, Joshua--I am sure you can go even faster.” “Amaya, good pace and good form--don’t give up.” By the time we were done, even Fabian, who did not look like he had forgotten about that ice cream truck, was starting to move his feet a little. We finally made it to the end, and we slowly high-fived each kid to congratulate them for making it.

The announcements for tomorrow were brief: the energy and engagement were low today--let’s have a better day tomorrow.

I gotta say, today was a Monday!