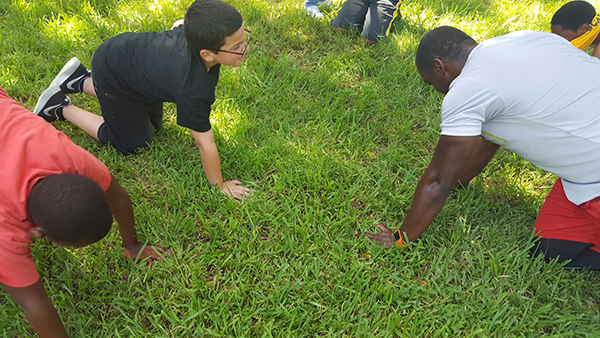 From outside the room, it seemed there was a live acapella concert in CAMP 4 Justice. Entering the room only confirmed this--all the kids were around a table, drumming, laughing, and freestyling. They were actually coming up with rhymes on the spot, covering topics limited to food, fun, dancing, and as we entered, FitLit. I could not resist, so I joined them. While I was drumming on the table with them, “Balla” worked its way into their rhymes, and this went on for about forty more seconds until it stopped. We all burst into laughter, and right there, a silent agreement was made between all of us--yesterday was forgotten, and we were ready to work. So right away, we turned on the music and they started reading. During their twenty minutes of SSR, we walked around to check on them, and the only one who needed assistance was Ashley, since it was her first day. We quickly briefed her on our SSR procedure, gave her a book, and she joined the group as comfortably as if she had been there since the beginning. Twenty minutes later, we led a very short discussion where the kids had one task: provide us with the name of a protagonist and the name of an antagonist from the book they were reading. Prodigy, Launy, Tamir, and Andrea easily accomplished the task, and even though Joshua had to be encouraged, he did it as well. Sean struggled, though, because he was reading poems; Amaya seemed to have forgotten the meaning of the word protagonist; and Ashley was not sure how to proceed since she was reading a magazine. A few minutes of guidance were enough for Sean to focus on one poem to answer the question, Amaya to refresh her memory, and Ashley to realize a pop star in her magazine was the protagonist while the fans harassing her were the antagonists. We closed up on a high note and ran outside for our Fit session.

Before working out, I told the kids, “look, my mom is here. I believe she can outwork you guys today, but I need you guys to prove me wrong.” This seemed to be all I needed to say for them to be fired up. With Joshua, Caleb, Prodigy, Amaya, and Mr. C leading, we went into our first round of High Intensity Interval Training (HIIT). I emphasized the importance of starting very slowly because I really wanted them to actually push themselves and go significantly faster as we progressed throughout the workout--they did not disappoint. We started with jogging, continued with butt kicks, then high knees, and finally jumping jacks. By the third round, Joshua and Caleb were actually going faster than I was. “You guys are actually beating me today,” I said, and that comment only served one purpose--make them go even faster. Our second HIIT circuit was a little more painful because it involved squatting, and the kids’ legs, as well as mine, were still sore from previous workouts. However, they completed the work in good spirit and earned a well deserved break before our last exercise of the day--as many burpees as possible during sixty seconds. Most kids yelled in what sounded like a mix of frustration and excitement, but Joshua was unmistakably excited: “I LOOOOVE, burpees,” he said. “Alright,” I responded. “I need you guys to beat me again on this one.” This got Joshua, Caleb, and Prodigy super excited. “5..4..3..2..1,” and we all started performing burpees as fast as we could. I kept up with Caleb for ten seconds, but then I could not anymore. Along with Joshua and Prodigy, Caleb left me in the dust, and that made me extremely happy. Ten seconds before the end of the minute, though, they all stopped out of breath. That’s when Leiva yelled--”come on, guys, ten more seconds--try at least three.” Without saying a word, all the kids made a final push and performed the last three burpees.

As we high-fived each other, most kids sat on the grass or the yoga mats and started talking to us. At first I was surprised that they did not want to rush to the bus, but next thing I knew, I was engaged in full blown conversations with them. Tamir wanted to know what had gotten me to start exercising, and then she wanted to know if I only eat salad. I explained to her that I love meat too much to eat only salad, but I emphasized the health benefits of exercising--”I want to live longer,” I told her. In the same conversations, I found out that she has been a vegetarian for years; then I learned that Ashley had lost 10 pounds recently because she had started exercising and eating healthy; and finally, I learned that Caleb thought a vegetarian was a person who eats grass.

We gave our only announcement of the day: tomorrow is a full Lit day, and Thursday is a full Fit Day.

As expected, the Monday Syndrome had been kicked out, and the kids were back to their usual selves, with a little extra fuel that might have come from me challenging them to outperform me and my mom. As we are sitting here planning for the last three days, we are already missing the kids, and we can’t believe that the last day is this Friday. For now, though, we are excited to have a full Lit day tomorrow. Can’t wait to learn something new from the kids tomorrow--it’ll be hard to beat Caleb’s remarks about the grass-eating-vegetarians, though.