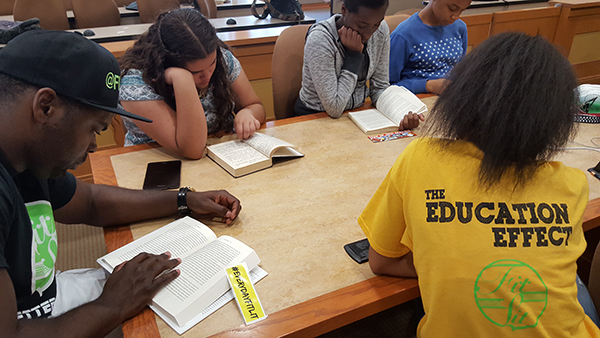 “We are going to start with a very challenging exercise today--for sixty seconds, you will remain comfortably seated, free your hands, and simply remain silent. After we are done, I am going to explain the reason behind the exercise.” My request was immediately met with a slew of questions and comments--”Like, a WHOLE minute?” asked Sean; “what if somebody starts talking?” continued Launy; “Of course we can do this,” added, Amaya, “but what’s the reason for doing this?” “He JUST said, it!!” Responded Prodigy, and I continued to watch them until they eventually got quiet. I reiterated the importance of completing the exercise faithfully, and we started our sixty seconds of silence. This looked like the most painful activity they had ever endured. Joshua’s face suggested that he would have rather attempted to perform sixty burpees in sixty seconds; the smile on Caleb’s face suggested he had just remembered the funniest joke in the world; Launy’s desperate attempts to make eye contact with Tamir implied that Launy’s life potentially depended on whether or not Tamir would keep ignoring her; meanwhile, Fabian was consistently spinning his chair, in an apparent attempt to start the first ever FitLit whirlwind. Leiva and I watched them inquisitively, and though we were obviously interested to see what they would do next, the sixty seconds were up quickly, so it was time to debrief. “Was that a difficult exercise?” I asked them, and they chorally responded, “No!” “Then why were you so uncomfortable? Why did your body language imply this was so painful?” I asked. The kids went on and on, trying to explain why they were so restless, but Launy summed it up when she said, “we are not used to it!”

From then, we transitioned into a lesson about the brain. The kids learned the key functions of the amygdala, the prefrontal cortex, and the hippocampus. Using various relatable examples such as a boy who can no longer speak when he sees his crush or a girl who runs away and smiles when she sees a cute boy, I explained the function of the amygdala. Then, with examples such as trying to decide whether or not to steal an expensive cell phone or going through the experience of learning how to ride a bicycle for the first time, I explained the function of the prefrontal cortex. Finally, using common memories such as one’s mother’s cellphone number or being a seasoned bicycle rider, I explained the function of the hippocampus. I concluded by explaining to the kids that the sixty seconds of silence were designed to help them calm their amygdala so that their prefrontal cortex could work better. After we reviewed all three parts of the brain and their functions, I invited the kids to ask me any question they had on their mind, and they took me up on it--Launy wanted to know if a hippocampus would keep working if the brain was filled with blood; Caleb wanted to know if his teacher had told him the truth about the fact that each time we blink, our memories take pictures; and Ashley wanted to know why some people can’t remember certain things from their hippocampus after an accident. I answered those questions to the best of my ability and we transitioned into our SSR session of the day. This time, I had also brought my book, so for twenty minutes, I also read in silence.

After SSR, Leiva skillfully connected our mini lesson on the brain and the kids’ reading. “We learned that the amygdala usually responds in three different ways--what are they?” The kids responded in unison, “Fight, Flight, Freeze.” “Good,” Leiva continued; “now tell me if there was any character in the book you are reading whose amygdala took over their brain. Did you identify a fight, flight, or freeze reaction in a character?” The kids thought about this unusual question for a few seconds, and then they all energetically raised their hands. What followed was a series of creative answers explaining how multiple characters had let their amygdala take over their brain. The one answer the whole class ended up discussing was Prodigy’s. He was reading Spiderman, and he argued that Spiderman had shown signs of “Flight” when he put a halt to his mission of saving the world in order to go after his girlfriend. Some kids argued that this was more of an example of “Fight,” but then Leiva reminded them to focus on Spiderman’s original goal from the beginning of the story. The kids all concluded, “When you are trying to save the world and pause to go chase your girlfriend, that means your amygdala is definitely in Flight mode.”

We concluded with a few announcements: Tomorrow is a full Fit day, and we have a guest speaker. In order to prepare for the speaker, ask yourself the following question--”When you grow up and have a job, would you rather work for a company that pays you a lot of money or work for yourself?”

We want to make sure the kids have an awesome last day on Friday, so we have some fun activities planned as well as some gifts for them. We are already working on an action plan to remain in touch with them throughout the school year and make sure that they continue to FitLit. The last two days are going to be bittersweet.