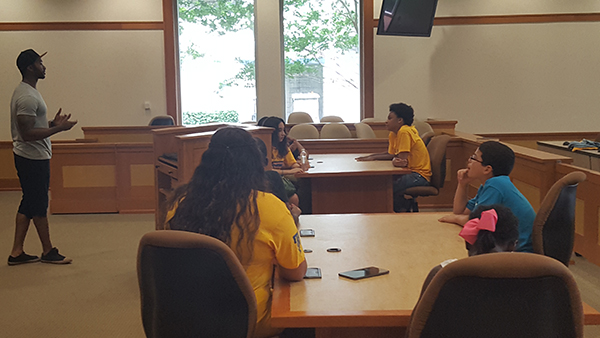 Leiva and I entered the room with Raymond, our guest speaker, and Jackie, his girlfriend. Right away, the kids stopped everything they were doing and started staring at him. “Wow, are you a football player?” Caleb asked, as he gave a once over to Raymond. Amaya yelled, “Balla, is he your brother? Y’all kinda look alike!” I let the kids express their excitement with questions for about a minute, and then I asked them to sit down and pay attention. I proceeded the remind them that in preparation for our speaker, they were supposed to reflect on the following question: when you grow up and get a job, would it be better for you to work for a company or work for yourself? Ashley immediately answered, “it’s better to work for yourself because you decide what to do and how much money you make.” Sean yelled, “It’s better to work for a company,” but he did not elaborate. I then told the kids to keep their thoughts on the matter in mind and listen to our speaker.

Raymond then started to tell the story of the tumultuous journey that took him from a star athlete student at Booker T. Washington senior high school to an entrepreneur, a personal trainer, and a motivational speaker. Raymond told the kids that growing up in Overtown, he was just a regular kid who wanted to be an actor and did not like being thin, so he decided to put on muscles. Lacking the traditional resources to make this change, yet not willing to give up, he turned to YouTube videos, and learned the process necessary to gain muscles. In this journey, Raymond did not have much support, as his mother was working hard to support him, and his father was not present in his life. “I bought oatmeal for $2.50, and I ate that all day while training,” Raymond reminisced out loud. “There was nobody else that was going to do it for me, so I had to do it for myself,” he added. As Raymond continued to speak, the kids were staring at him the same way many kids look at firefighters, singers, athletes, and others. They faces were silently screaming nine words in admiration--”I want to be him when I grow up!”

In a dramatic twist, Raymond asked the kids to close their eyes and visualize themselves in a scenario: “Imagine yourself being successful and having everything you want. Imagine yourself working hard and realizing your dreams.” With their eyes closed, most kids were smiling, and that’s when Raymond loudly slammed the table to snap them out of their imagination. From the looks on their faces, this interruption of their imaginative minds first confused them, and then amused them. As they inquisitively stared at Raymond, he told them--”that’s the reality of life. No one cares about your dreams. Nobody will make those dreams come true for you. That’s something you have to do yourself. You can’t count on anybody!” The looks on the kids’ faces went from confusion and laughter to clarity of understanding. They were all nodding their heads as he said this. After a few more minutes of interaction with Raymond, the kids learned that he was the first one in his family to graduate from high school and go to college--”I did not finish college, but I am going to finish it next year, trust me.” They also learned that he hung out with the wrong crowds and had gotten in trouble a lot, but the fact that he still had good grades allowed him to get a second chance at success, and he seized it. Because people were always impressed with his physique and constantly asked him what they could do to look like him, he did the research on how to become a personal trainer, and he became one. The kids were impressed to learn that Raymond had been training people since he was seventeen, and when he told them he had gotten the chance to train Chad Ochocinco, Prodigy yelled, “that’s my cousin!” and we all started laughing. Soon enough, it was time to go outside for some Fit.

I warmed the kids up, and Raymond led them through a couple of football drills on the agility ladder. They were all excited to show him what they could do. As they followed his lead and listened to his encouragements, I could not help but smile when I noticed that every single one of them was engaged and trying as hard as possible. One of the final exercises was a plank. Raymond stated, “As we plank, I am going to see how long you guys can hold. Let’s see who gives up first!” Twenty seconds into the plank, most people’s arms started shaking. That’s when Raymond started speaking again, “this is like life. I know your arms want to give up, but you can’t allow them to give up. You gotta keep fighting.” Those words fueled the kids’ muscles, so they fixed their form, and they held on. When there were about fifteen seconds left, Tamir and Alicia could no longer hold on, so they put their knees down. They looked very disappointed in themselves, but Raymond reassured them, “ that’s fine! Just like in life, when you fall, you get back up again. Come on, you got this.” The girls looked at each other, smiled, and got back into it. The kids made it together, as a group. Soon enough, it was time to go home, so Raymond gathered the kids, had them put their hands together, and asked, “what are the most important words that you guys learned today?” “Opportunity,” “Ambition,” “Hard work,” "Dream big," are some of the answers the kids yelled. “Okay,” Raymond responded, “I like that one. On the count of three, we are all going to yell DREAM BIG!” After a first attempt that was not loud enough, Raymond led them, “One, Two, Three…, “ “DREAM BIG!”

The kids left with more energy than I have seen in them before. They stayed even longer than usual, and their chaperones had to remind them to head back to pick up their bags because the bus was about to leave.

We walked them to the classroom so they can pick up their bags, and as Sean was leaving, he asked, “Can Raymond come tomorrow to watch our final presentations? He is a cool guy!”

Today we saw the potential of what FitLit can truly be. Our dream is to one day have kids all around the nation go through FitLit camps where people like Raymond interact with them. As entrepreneurs with limited resources, we have been doing everything ourselves--we’ve had no other choice. We are working toward a day when other adults can lead FitLit sessions with kids all around the countries, so today with Raymond, it was nice to see how dream implemented by someone else.